Some secrets should be lost to the veil of time...

A group of dangerous space pirates have hidden in the abandoned Neoterica Research Facility, built into the side of a huge asteroid. The facility is very dangerous, the home of many fearsome monsters and failed experiments. Valuable relics and technology exist in the facility but most adventurers are too scared to even try and enter it.

You are Nix, the only bounty hunter tenacious enough to enter the facility and take down the pirates. Use your special abilities as a Caniden to make your way deep into the facility, capture the pirates, and discover the secrets of The Paradox Relic!

What is Nix: The Paradox Relic?

Nix: The Paradox Relic is a 2D scifi adventure. Take control of the planet of Neoterica's most ferocious Caniden bounty hunter as you travel deep into the labyrinthine halls of its derelict space station and research facility. Hunt down and capture your prey as you battle against mutant creatures, cunning pirates, and rogue AI. But all is not as it seems, as you discover a mystery that could threaten the entire planet!

The game takes visual and mechanical inspiration from classics like Metroid, Castlevania, Mega-Man, and numerous other action-adventure games from the early days of gaming, as well as mixing in some new ideas. It has been carefully designed for the original NES system, and can play on original hardware, or on a modern pc.

-- Nix: The Paradox Relic is in no way affiliated, endorsed or licensed by Nintendo -- 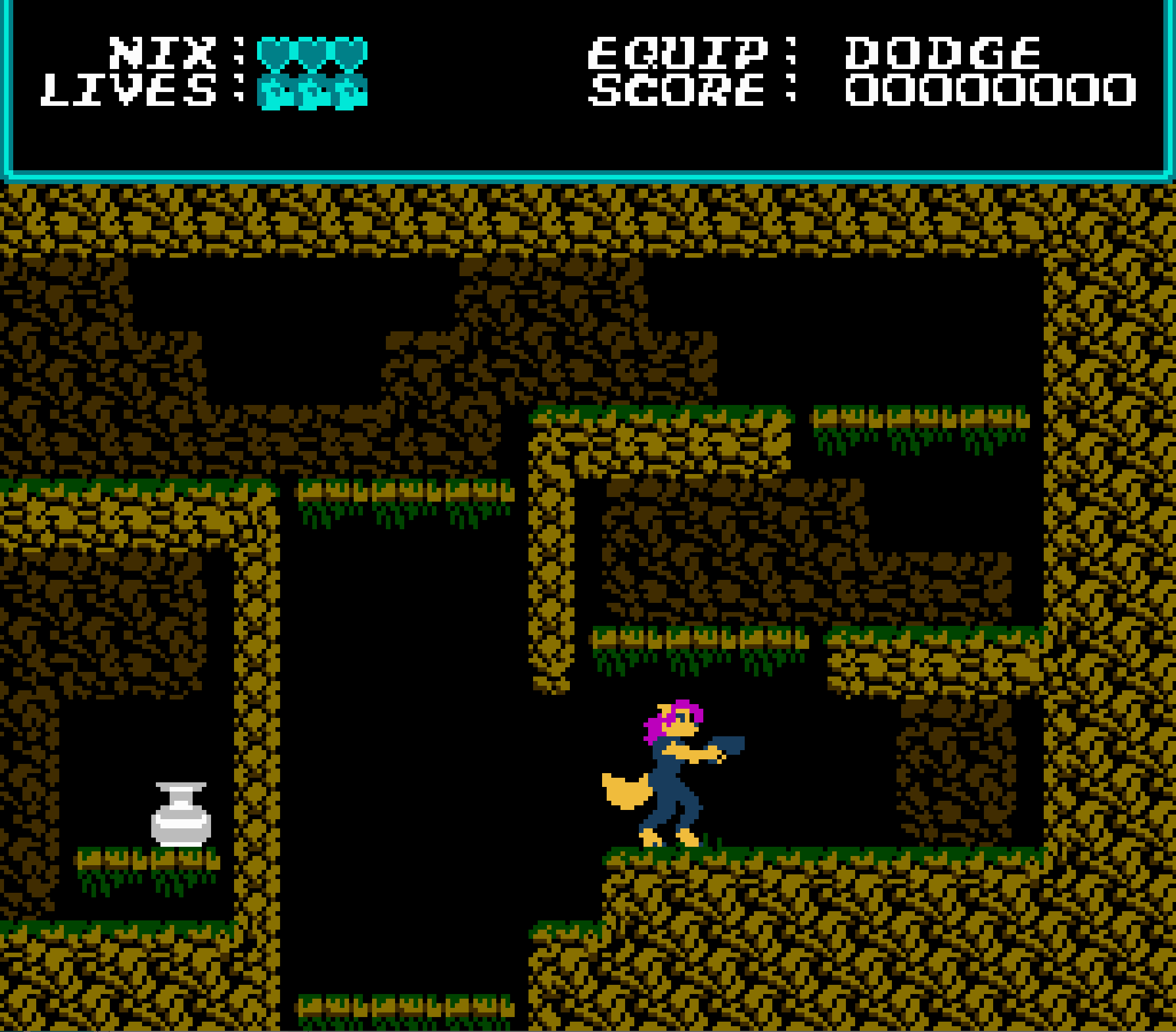 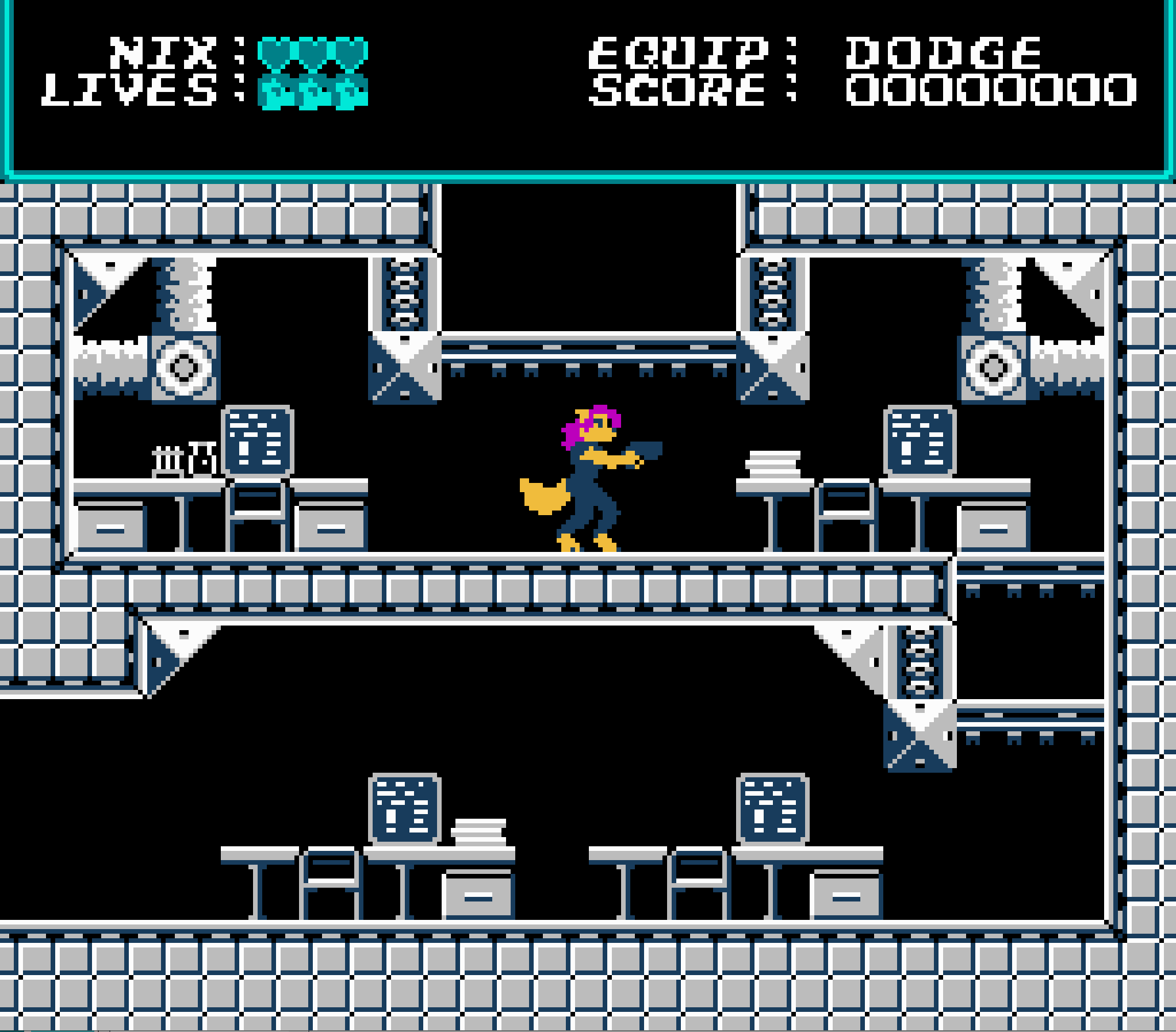 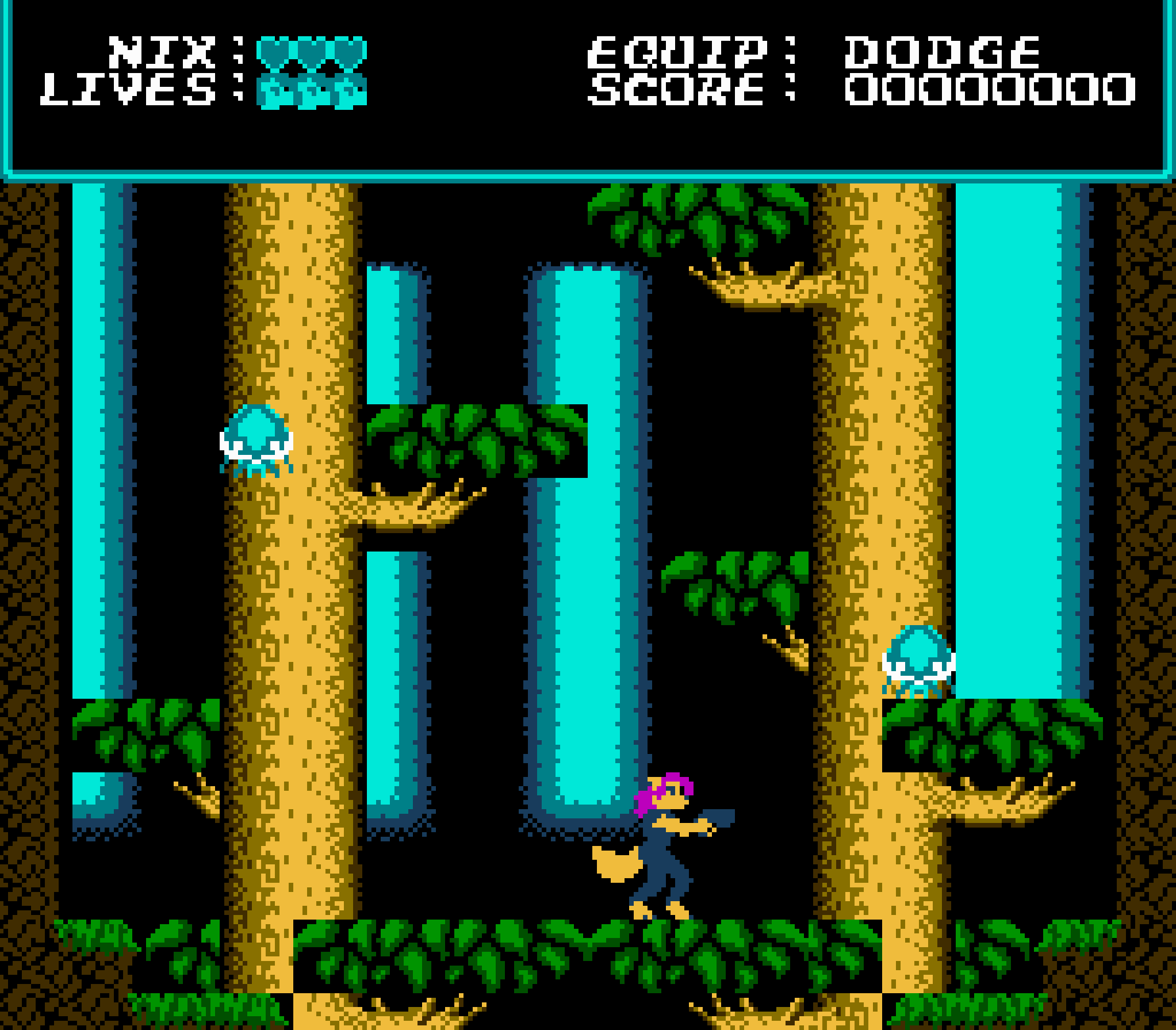 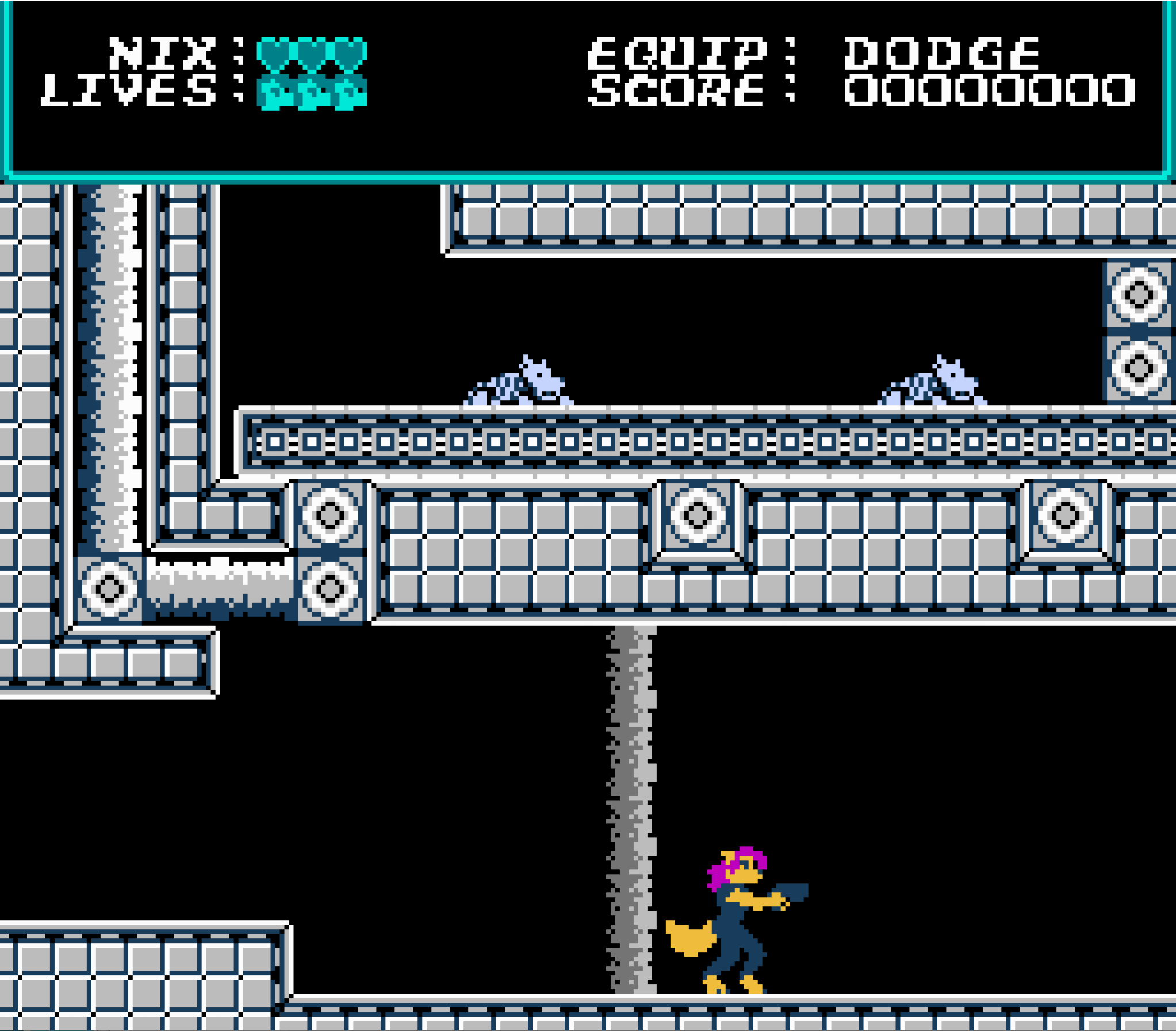 Wait? The Original NES? Why make a game for a system from more than three decades ago?

Yes, the original Nes. There are a number of reasons for this, but probably the biggest is: Why not? We have the NES to thank for everything that has come after, and its simple but powerful design has endured for decades. So many games on the system are called classics for a reason. They are not only still fun today, but serve as examples of how to make games entertaining, despite whatever limitations you may face. Almost everyone remembers and loves the NES, and with the recent release of the NESMaker game engine it has become much more accessible to create games.

But how am I supposed to play this?

After all, who still has an NES?

Nix: The Paradox Relic is going to be released in both Physical and Digital form. If you happen to still have an NES system, you can buy an actual physical cartridge of the game and play it just like any other Nes game. Otherwise, the game will be available as a rom to play in emulators, and hopefully in the near future a standalone PC executable.

How was this made?

Nix: The Paradox Relic uses Nesmaker, a new game engine that brings NES development to the modern age. It is a great introductory tool for game development, and you can make simple, hardware playable NES games with little or no programming experience. If you are willing to dive into a little assembly code, the possibilites with the tool open up exponentially. Make sure to check it out if you are interested in making your own game!

I fully encourage anybody who wants to record lets-plays or stream footage of Nix: The Paradox Relic or its demo to do so freely. You don't even have to ask me. If you need written permission or have other questions, send me an email at:

If you want to draw fan art of Nix: The Paradox Relic go ahead, even if you make money from your art. In fact, please share cool art with me :) If you want permission in writing, just send me an email. That being said, I would greatly appreciate it if you avoided sharing any adult-themed content to any of the official social media accounts for the game. I would like to keep the game accessible to a general audience. Thank you.

This is going to be where I am strict. Please -do not- create physical fan merchandise with the intent to sell without getting permission from me first. This would include things like tshirts, art prints, stickers, pins, magnets, or unlicensed physical game cartridges. This is to protect the games copyright and art assets from getting grabbed up and resold by big greedy printing companies that operate in the grey market, or homebrew game counterfeiters (yes, that exists). Thank you for understanding.

Copyright law is really wierd and complicated, especially when it comes to fan content. If the copyright owner doesn't defend it from infringements, they can lose the copyright. That is too bad, because I believe fan-art is great for everyone.

You may know me as Chronicler of legends or Chrono for short. I have been working on Nix: The Paradox Relic since the release of Nesmaker in August of 2018.

When I was a child, the Nes was my introduction to video games. Like many people, I would spend hours in front of a small CRT television, immersing myself in its primitive pixelated worlds. By the time my parents and teachers started to ask me what I wanted to do when I was an adult, I had decided I wanted to make my own games. When I was presented with an opportunity to develop a game for the system that inspired me so much, I couldn't pass it up.

I love video games of all kinds. Retro, Modern, Simple, Complex, First Person Shooter, Platformer, SHMUP, Strategy, Puzzle, Visual Novel... ALL kinds. And not just playing them. I love the rich culture and history surrounding video games, and do my best to preserve what I can for future generations.

Besides my experiments in game design, digital art, and programming, I also collect and restore retro video games and consoles, a hobby I have had for more than a decade.

I wouldn't have made it this far without help, and I am very thankful to everyone who supported this project.

First I would like to thank Jamie - My incredible wife.
None of this would be possible without her by my side. To say she was my moral support would be an understatement. She was constantly engaged with every step of development, giving me her input on art, music, level design, enemy behavior and all aspects of the game. Even with no programming experience, she helped me track down quite a few of the games nastiest bugs.
She is also the artist of all the cute retro-style artwork that is included in the manual. I described the characters and enemies of the game to her and let her use her own imagination to create these little pieces of art. I love the way they ended up looking.

I would also like to thank the amazing friends I made in the Nesmaker community:
Joe Granato: the creator of NesMaker, Artix, xWhyohwhyx, Dale Coop, Kasumi, Redherring32, Joe Alonzo, Cargo, FunctionalForm, and many others from the forums, facebook group, and discord server. Thanks for listening to my mountains of questions!

Press Kit is available for view or download from google drive:

For any questions, feel free to contact me at: contact.paradoxrelicgame@gmail.com

The information below outlines the data that is collected from you when using this website, and your rights for determining how that data is used, and for requesting its deletion.

Data we collect and what we use it for

Through the use of this website and third party services, we intend to collect the following data:

How we collect this information

The user can exercise the following rights in regards to their information:

As this site's goal is the advertisement of a video game, we recognize that a portion of our audience may be children under the age of 13. It is not our intention to infringe on the privacy rights of anybody, especially children. In order to provide safety on this site, no personal information is collected from children under the age of 13 without affirmative consent of a parent or legal guardian. Consent must be given on the sign up form, and again in the confirmation email that the user signing up is over the age of 13 (email plus method of consent). Just as with all other users, personal data of children under the age of 13 is not shared to any third parties other than those listed below.(The third parties listed below do have limited access to this information for the sole purpose of providing their services (web hosting/ handling email subscriptions)). Information collected by this site will never be sold to any third parties. Furthermore, no more data other than the child's email address will collected for the purpose of email marketing. The email address used to subscribe to announcements will be notified if any change is made to this privacy policy, and you will have the opportunity to immediately opt out of further emails and delete your information by clicking the 'unsubscribe' link provided at the bottom of all of our emails.

If you are a parent who has found that your child under the age of 13 has subscribed to our mailing list without your permission, or you simply wish to revoke consent for your child's data to be stored, you are entitled to request the types of personal data that has been collected, and request for it's immediate deletion. You can remove you or your child's email address from our mailing list immediately by clicking the 'unsubscribe' link provided at the bottom of all of our marketing emails. You may also contact the data controller (contact.paradoxrelicgame@gmail.com) to process your request.

The site has been designed to comply with GDPR privacy rules, including affirmative consent to have data collected, contact information for data controller, and simple methods provided for data deletion.

Third parties involvement in this site and its privacy

This privacy policy may be updated in the future if required. Any changes in the policy will be accompanied by an email notifying all email-list subscribers that a change has been made.